How to get rid of foxtails. Some of the lawn owners, like my dad, are a little bit too conscious about their super-organized and weed-free lawns.

I remember my dad used to set prize money for removing the foxtail weed on our lawn. And we fought over Who will pluck the weeds! That is one of my childhood memories.

Lawn owners, especially those who want their lawns to be immaculate and tidy, work their days off just for their maintenance. And believe me, finding a weed like a foxtail is a threat to the dignity of their gardens.

How to get rid of foxtails Well! foxtails, the name comes from the hairy tail features of foxes. These weeds have hair-like heads and are small in size; they stay closer to the soil.

They grow in a dry or moist atmosphere where the nutritional content is abundant, and there is more fertile soil.

The leaves of this weed are sharp blade-like, emerging from the base of the flower, whereas the flower has thin hair-like structures and contains seeds that grow out in their specific season.

A foxtail weed is one stubborn weed, you know why? Because like many weeds in our lawns and farms, these weeds grow along with the vegetation and tend to have a faster rate of growth.

Killing it won’t be an easy task. Only trimming or cutting the foxtail won’t be enough to completely get rid of it because its seeds have the tendency to grow at a relatively faster rate.

These weeds are known to be annual, which means they grow throughout the year. Some are seen to be perennial as well, where the land is irrigated properly with different crops like oats, peas, cereals, or ryegrass.

These crops are the ones that require a proper nutritional content; hence they exhaust the production of other weeds like foxtails in their field.

Getting rid of foxtail

The temporary phase, where you grow a common annual crop to exhaust the growth of foxtails, and the permanent phase, in which you grow the pasture you want on your lawn, after the eradication of foxtails and follow a series of maintenance and proper care.

The major and the most recommended solutions for the foxtail weed problem are the ones that I have listed below, which include a series of starting small damage to the weed to massive destruction and complete wipeout of the foxtail weed. Foxtails are, as I already mentioned, a well and rapidly growing weed that can’t be killed by mere pesticides or broad-leaf herbicides; they require a strong action and maximum output qualities.

One of these is Glyphosate, which is what you call a non-selective herbicide that not only kills the required weed or plant but also kills the ones surrounding it.

Actually, you might wanna think that for the sake of getting rid of a small weed, you would have to “Burn the whole garden.”

Well, fellows, this is what you should do; if you really plan on wiping out this weed, then you need to burn these up by using glyphosate spray. It will damage the surrounding area plants, but that’s the best option you have.

Every problem has a natural solution

The other thing that might help you is a 5% solution of our most renowned chemical, acetic acid or commonly called vinegar. Acetic acid also has a considerable effect on the young growing foxtail weeds.

They are what we call a natural herbicide to a “natural problem,” as we know that acetic acid/vinegar disrupts the pH balance of the foxtail weed and inhibits the growth of new germinating ones.

But a demerit of this is that this remedy has little effect on the weeds that are older and grown big.

The Temporary and the Permanent pasture

A foxtail weed is removed from a field with great patience, and it requires some effort for the “Holocaust” of foxtail weeds. To proceed with this job, we need to pass through two phases which are

A temporary pasture is what we call a “for the time being” pasture that is just grown for a certain period. Why do we grow this? Let me tell you, the field of foxtails is first sprayed with glyphosate and is left for 7-10 days for the herbicide to give out its effects.

This spraying will be done to kill the current field of the foxtails. Later, the soil is prepared for the sowing of new seeds of a temporary crop.

This means that the crop grown will acquire all the necessary nutrients that help the foxtail to regrow and again start germinating.

This crop will exhaust all the basic nutrients, and the foxtail growth will stop.

Growing the pasture we want 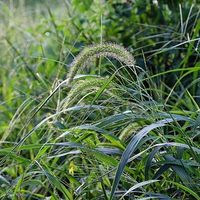 All these efforts are done just for the sake of that pasture we wanted to grow in the first place, and we had to do all this hard work because we wanted to remove the foxtail weeds that were inhibiting our pasture field.

The major thing to do after the removal of foxtail weeds is to clear the soil after the temporary pasture and use appropriate fertilizers during the clearance.

Then, plant the seeds of the grass or pasture we want. After all this, we have to take care of the fact the foxtail doesn’t regrow.

And to avoid that, we will have to be a lot more vigilant and careful. A series of sprays and herbicides is done to prevent the future invasion of the foxtail weeds.

How to get rid of foxtails. The foxtail weeds are a pain in the neck as they leach onto your pastures also posing a threat to the embellishment of your lawns and fields.

And to get rid of all this mess, you just have to follow the steps that are imparted above. I know it’s a long process and a tiresome job, but to get something, you have to lose some sweat.