Kitchen sink gurgles when toilet is flushed. Everyone flushes their toilet at least once a day, but we know that you are going to hate the sound of gurgling from the sink, and you will get more irritated when that sink is your kitchen’s sink. This already even sounds like a nightmare.

The worst thing is that if you ignore this problem, it will end up becoming big trouble. 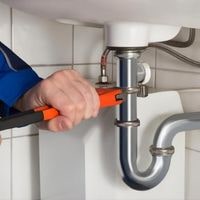 When your vent pipes get blocked, that means that they can’t pull the air from outside, and when you flush your toilet, outside air can’t be pulled out because of the blockage.

Then toilet pipes have to pull pressure, and it starts pulling from the attached drainage pipes, which end up gurgling.

To get rid of this problem. You have to check the pipes that they are clogged, and if they are, then make sure that vents that are lodged are working properly.

Try to remove the substances that are clogging the drain to get rid of the blockage. If dirt and debris are causing the problem, then try flushing hot water a few times.

Inspect the main vent pipe by going on the top. Use a ladder, and then after reaching up to the top, use a flashlight to look for any clear thing that is blocking the drain.

If you can remove that thing using your hand, and if you can’t reach up to that thing, then use an augur to remove the block.

Set the plunger cup to seal the sink’s drain and then push the plunger, likewise pulling it up but make sure not to break the seal while putting pressure. Then plunge the sink drain for about 15 to 20 minutes.

The valve that lets the air enter the drains is mostly working for 15 to 20 years, and then they can get damaged, and if they get damaged, the air will not pass out properly and will end up gurgling.

Remove the air entrance valve by removing it and then running the water out of the sink.

And if the drainage system of the kitchen sink works properly, then it means that the valve is damaged and not working properly but make sure not to run the water without the valve because it can make a mess.

Then thoroughly check the valve and inspect the problem and clear it. After clearing, put it back in place.

first of all, you have to figure out if your sink’s drainage system is completely blocked or partially blocked.

If your water starts gurgling slowly and draining slowly, then that means that your sink is blocked partially and you can’t ignore this problem because ignoring it will make it even worse than before.

If you will ignore the partial blockage of your drainage system, then as we’ve told you before that it will go even worse to the complete blockage, and now you are in big trouble because your drain is completely clogged, and you have to remove this blockage

Causes of kitchen sink gurgling when Toilet is flushed Gurgling is produced when air or water can find its way through the pipes or when air passes through the p-trap of your kitchen sink.

The problem with your vent can also block your drain, but the most common cause of gurgling is a blockage.

The vent pliers basically direct the arrangements of your pipes, and in our common traditional plumbing system, which we call as wet venting, one extended pipe operates from the sewer to the top.

When we operate using wet venting, then spigots share a pipe that goes through a process in which wet venting and external venting form up and pull air through the top of the roof and below into the sewer pipe.

Troubles with a blocked Vent system

Vent pipes are used to control the pressure of the air in the plumbing tubes, which help to escape bad smells and unwanted gasses and make a place for fresh air.

When your vent system gets clogged, then it will not let the gasses and bad odors escape and they will end up leaking in your home, and then you will feel bad odors around your home.