At the peak time of baking, when I found we were lacking the measuring scale, I was quite disappointed naturally.

A joyful moment like this was, to some extent, spoiled. Tomorrow, you can also have this sort of experience. Then what would you do? Rush to the market and buy it?

I would suggest you shouldn’t do this mistake, rather take heed of my mistake.

The idea of sharing my experience is exactly that you take a lesson out of my experience. I made a mistake, and then after that, I learned some of the alternative ways of measuring ounces.

How to measure ounces without a scale There are many different ways to estimate the weight of an item, but for the most accurate outcome, you should use a scale.

When measuring volume and weight, it’s important to specify whether you are using ounces or fluid ounces, as they’re not always equivalent.

If the water is boiling, this will be true, but 120 degrees gives a better approximation. Room temperature water would probably yield a higher reading.

Household stuff for an estimate

If there is much possibility that you do not have a measuring cup and measuring spoon, then what would you do?

The idea of a measuring cup and measuring spoon often comes first to your mind in such a situation, but what would you do even if you don’t have both of them?

Don’t worry; you still have some household stuff that can be handy for you in measuring ounces. Below, I will discuss a few of them with their measure.

Go to your fridge and take an egg because one egg roughly measures up to 1/4 cup.

You do love playing tennis? If you do, then take a tennis ball in your hand because one tennis ball measures up to 1/2 cup.

All you need to have some basics of science and maths in your mind. There are many chances that you have measuring cups and spoons right now in your kitchen; they will help you in measuring the ounces in the following manner.

If you have studied maths in school, then you must have an idea that one pound equals 16 ounces. I shall further throw light on a cup measure that is eight ounces.

In simple words, if your food requires one pound of chicken or mutton, then you need two cups of meat. 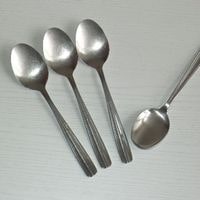 One ounce of anything liquid is equal to 2 tablespoons. Now it has become very much clear to you that if you need 4 ounces in your food, then you would require 8 tablespoons for it.

One ounce of anything liquid is equal to 6 teaspoons; now, you can do the simple mathematics.

If your recipe requires 3 ounces of liquid, then you would put 18 teaspoons on it.

After reading this article, you will feel motivated to practice the alternative methods of measuring ounces in case you don’t have a measuring scale.

Now you have an idea that how you can measure the ounces without scale. Of all the alternative methods, the best method is measuring the ounces from the measuring cup and measuring spoon.